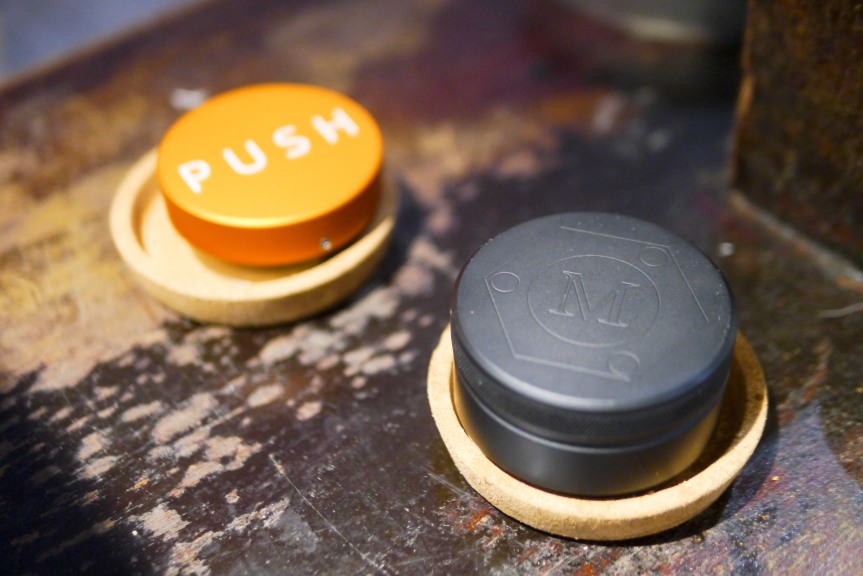 In an earlier blog post I compared two new tampers; the Clockwork Espresso PUSH and the Mahlgut Palm. For me, the Mahlgut was too heavy to use constantly. When tamp came to shove during service, the PUSH was the clear favourite.

Mahlgut read the blog and kindly offered to send me a Palm SL to try out. The SL is lighter than the Palm and aimed more at use on a bar, so this should be more of a fair comparison. 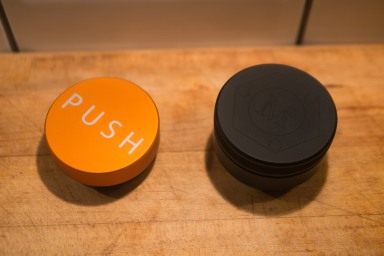 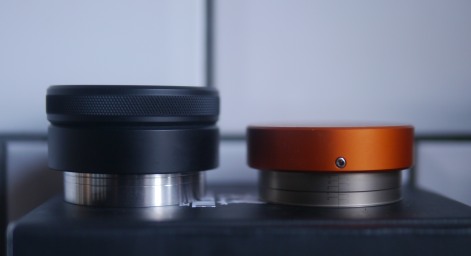 They are both very nicely designed products and feel premium (as they should for the price).

The PUSH has a lip on the rim compared to the Mahlgut’s straight sides. Although it is 0.5mm smaller, the Malhgut tended to get stuck in the basket more often than the PUSH. Stray grinds accumulate in the area above the lip on the PUSH, but they have nowhere to go on the Mahlgut which might cause the jamming.

The PUSH has a scale on the adjustment mechanism, the Mahlgut doesn’t. This makes the PUSH easier to change between settings and to ‘dial in’. 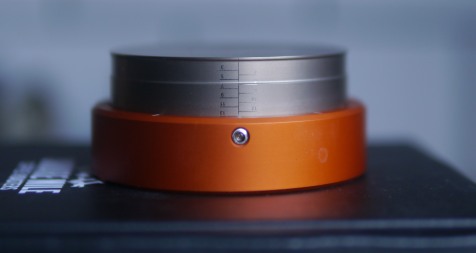 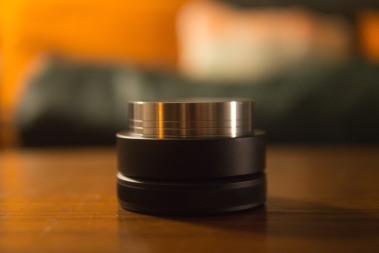 To adjust the Mahlgut, you unscrew the top section and the base then screws in and out. The knurled finish on the upper part of the Mahlgut provides a nice textural contrast as well as giving some grip on the locking mechanism.

To adjust the PUSH, you use a key to loosen a grub screw and then screw the base in and out:

This means the PUSH has a lower profile, but the downside is that if you have to adjust the tamper, you need the key (or an equivalent sized Allen key in case of emergency).

The adjustment on the PUSH felt more robust than the Mahlgut. Once the PUSH is locked in, it doesn’t budge. The Mahlgut can move slightly – particularly if you’re trying to un-jam it from the basket. Losing your setting during a service is a bit of a stress.

The Mahlgut is taller and, despite being ‘lightweight’ version, still weighs in at over 300 grams more than the PUSH. It fills the hand, and the extra weight makes it satisfying to use without being overly heavy. I can’t decide if I prefer it to the PUSH, which is more maneuverable, but the PUSH can feel lacking in heft in comparison (which it isn’t; the PUSH is still almost 400g). Cop out: they’re both good in their own different ways. 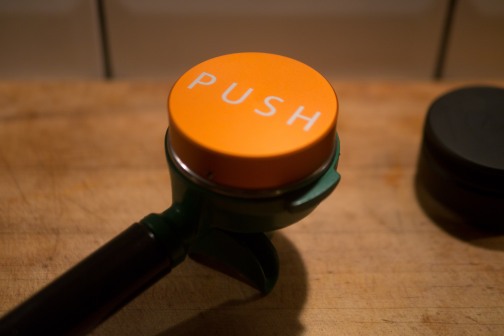 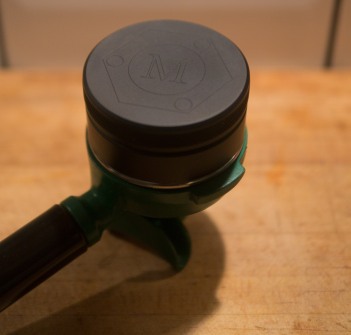 The PUSH is a 58.65mm and the Palm SL a 58.6mm. Although I love the clean basket they leave after tamping, I think both of these might be slightly too big.

As Matt Perger explained in relation to the Pergtamp, tiny differences in tamper diameter and design can have a massive impact on the effective area tamped. You obviously want your tamper to be as close to the size of the basket as possible, but the problem is that the baskets aren’t a uniform size – they’re a stamped part, and have set manufacturing tolerances.

In the previous blog on tampers, I mentioned that I got two new VST baskets which were too small – 0.1mm smaller than ‘normal’ – and the 58.65mm PUSH got jammed in them. Socratic Coffee had this issue too with their Pullman Big Step:

20:10 Sydney time…@vstinc brand new 20g VST baskets and 3 of them not fitting @pullmanespresso #bigstep anyone out there experiencing this issue?

While bigger is therefore better up to a point, it’s important to be aware that super big tampers won’t be necessarily fit all VST baskets.

Occasionally both the Mahlgut and the PUSH get slightly jammed in the basket, although the Mahlgut seemed slightly more prone to sticking. This is usually caused by grinds building up on the side of the tamper and the Mahlgut may be more susceptible because of the straight sides. When you’re skirting so close to the limits of the basket, there’s really no space for anything else – even a few bits of ground coffee.

VST recommend a tamper of 58.4mm maximum diameter. If you go above this, there’s a chance the tamper won’t fit (and it won’t be the tamper’s fault). After using 58.55mm and 58.65mm tampers, 58.4mm feels a bit slack and leaves a few crumbs round the edge of the basket.

Anecdotal research on forums and the web indicates that very few people have problems with 58.5mm tampers – that size seems to be a happy medium between tamping the biggest possible area of the the bed and not getting your tamper wedged in your basket from time to time. It’s that extra 0.1mm going up to 58.6mm where problems start occurring.

While both these tampers did stick occasionally, stepping down the size slightly should eliminate this. You can order the Palm SL in 58.5mm, and Clockwork has said the production version of the PUSH will be slightly smaller than the Beta model I have. 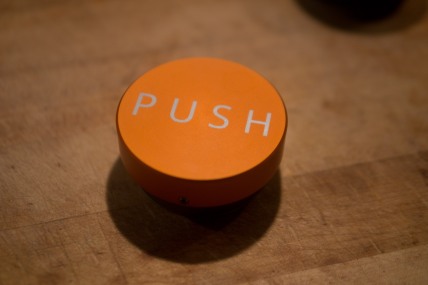 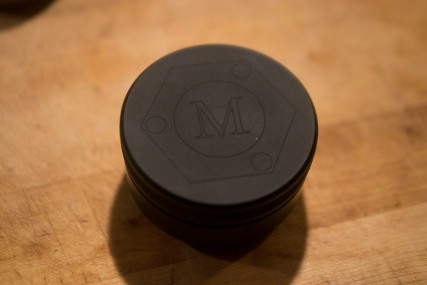 Having used the two tampers at various events over the last fortnight, it’s hard to recommend one over the other. Tampers are so subjective; you might prefer one because of the weight, or another because of how it feels in the hand.

If I had to choose one to throw in my bag and take to a pop-up, it would probably be the PUSH. The adjustment scale makes it easier to move between settings and while you need a key to adjust it, the mechanism is more solid. I felt more confident in it and the lighter weight makes it more comfortable to use over and over. And it’s orange.

You won’t really go wrong with either of them, though. 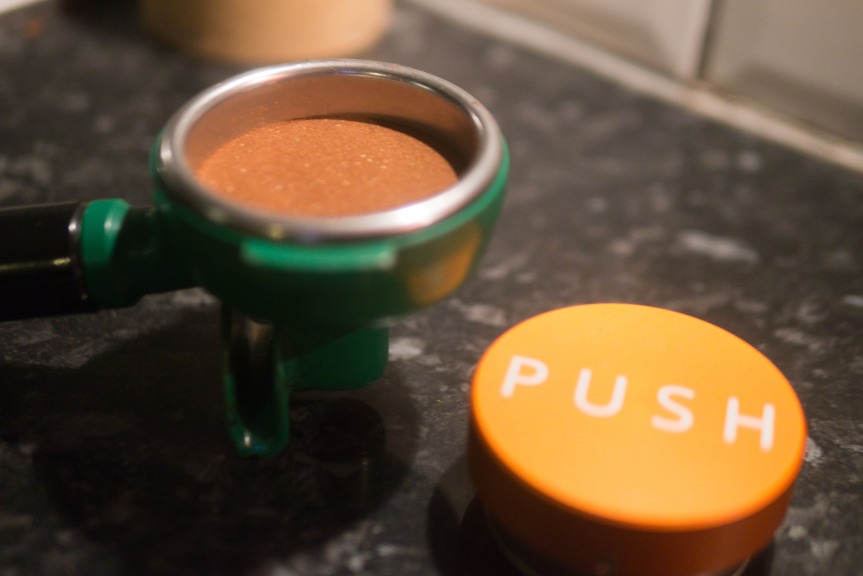 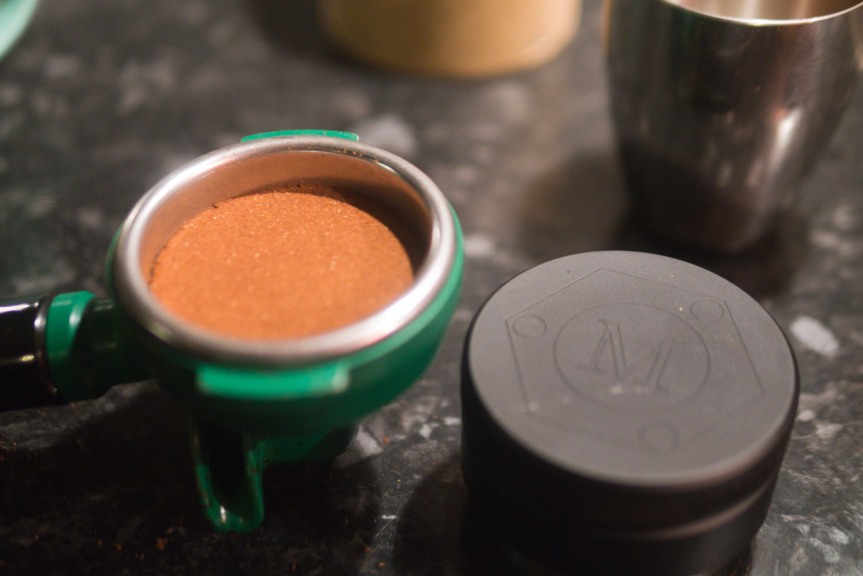 Colours: loads, but not orange

There’s a lot of debate on whether these type of tampers are the best thing since sliced bread or something that’s more likely to introduce inconsistency than reduce it.

One of the main arguments that has come up recently is that unless your dose is consistent all the time, the tamp pressure is going to be variable. It’s been shown that tamp pressure doesn’t actually make that much difference; provided you’re compacting the coffee to a decent density, whether you end up with 6kg or 16kg of pressure won’t affect the shot. As long as your tamper is set to a depth that your lowest dose gets tamped sufficiently, you’re sorted.

I think maximum density is a slightly misleading term, since the graph of grind density against tamping pressure would never ‘technically’ become totally flat. It exponentially decays, which means that the amount of force required to compress the grounds another 1mm say, increases exponentially. I’m being a bit pedantic though, and other than that I thought Matt’s post on tamping pressure was really good. Another thing to take into account is that ground coffee is very slightly springy, meaning if you tamp it hard with a PUSH, then release, the handle will sit slightly above the basket. I’m talking ~0.1mm, or maybe slightly more if you’re tamping really hard.

So what that means is that if you’re tamping with a fixed dose, and then another fraction of a gram sneaks in, as long as you’re not already tamping as hard as you possibly can (and therefore you’re reaching the limit of your own strength) then the handle will still touch the basket, with slightly more force. When Maxwell tested it out before WBC, he said he found that it coped well with +/-0.5g.

I guess this could depend on lots of things – type of coffee, grind size etc.

I also think from an ergonomic point of view, this type of tamper is much more comfortable to use. Your hand and wrist stay in a natural position. Going back to tamping with a handle feels like an act of contortion.

Read up, try one out if possible, decide if this style of tamper is for you. I reckon they’re the future.

Recent Posts: It All Started Here

We’re settling down in Shawlands